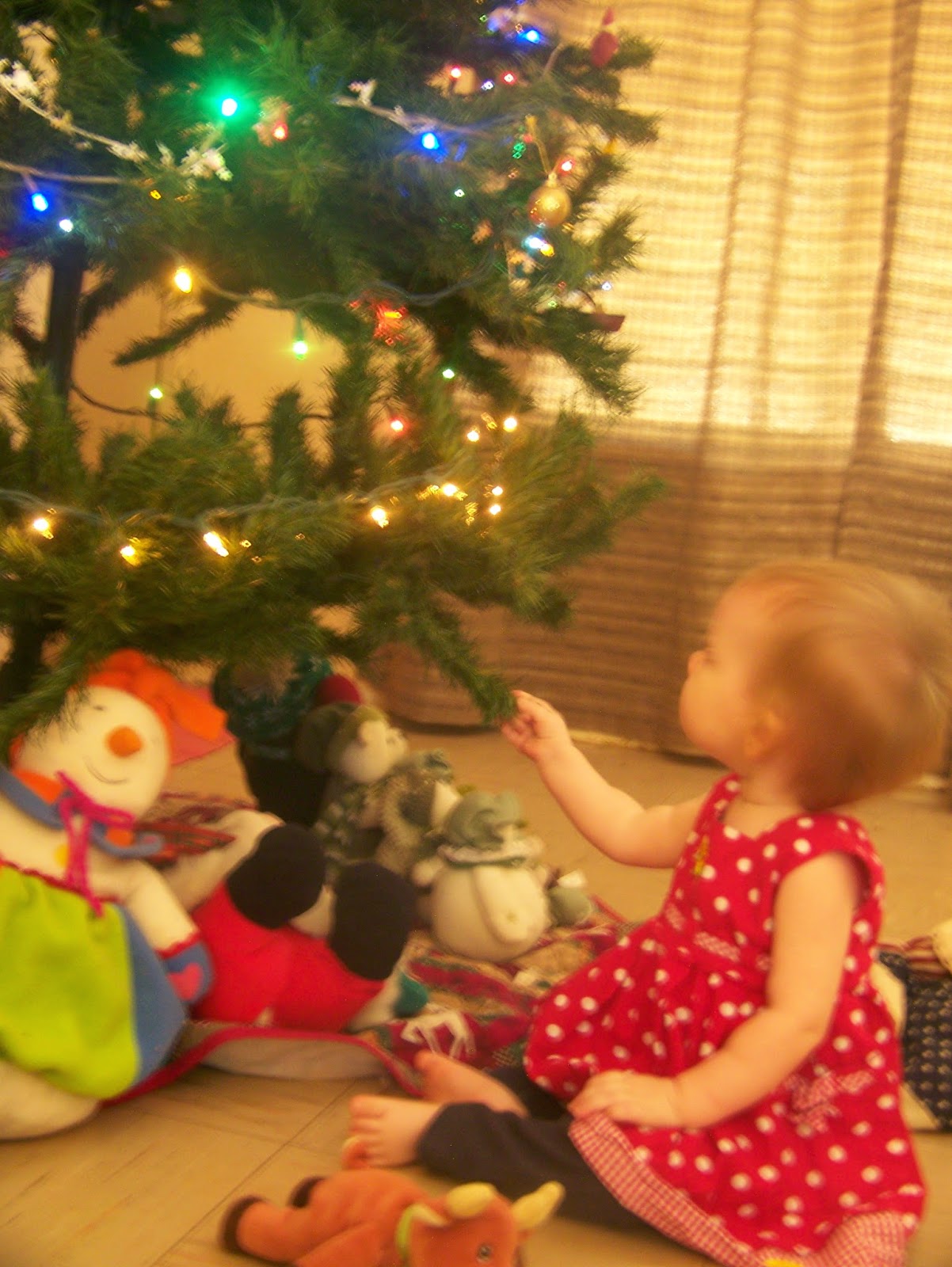 We have now experienced our first Christmas in Nalerigu. It was an unusual Christmas for us, since we actually celebrated over several days, but we had some traditions that we tried to keep. Previous missionaries left an artificial tree for us, as well as a few ornaments. After putting up the tree, we had an ornament making day. We cut out some angels and Rebekah colored them. We cut out some circles, decorated them, and glued them together to make ball ornaments. We also made stars of various colors. I've never had a tree almost entirely decorated with paper, but it was a colorful, beautiful sight to see.

A few days later, several homeschooling, expat missionaries who live in northern Ghana came to Nalerigu. One of our neighbors is part of the homeschooling group for northern Ghana, and they offered their house for the monthly activity. They celebrated Christmas during the December monthly activity by making toilet paper tube Christmas carolers and decorating cookies. All the children had so much fun with each other. It was also such a blessing to make new friends by meeting many other missionary families who live in northern Ghana.


Tim was given 3 days off at the beginning of Christmas week. We enjoyed Sunday, relaxing with the family and preparing for Monday. On Monday, we had our first Christmas celebration. We started off the morning by eating a big breakfast together, followed by reading the Christmas story and discussing with Rebekah why it was so important. Next, we each opened a gift that we had been given. Several of you were so gracious to send us things to enjoy for Christmas. As expected, Abigail enjoyed the wrapping paper the most, and Rebekah just wanted to open everyone's gifts in order to call them hers. It is so fun as a parent to watch your little ones' eyes light up with excitement. Tim then went over to our neighbor's house to see if they could figure out why we didn't have internet, while we girls straightened up from breakfast and opening presents.

When Tim returned (without discovering our internet problem), we prepared to go to town. This Christmas we wanted to make a point of sharing with others as a family. One of the ways we decided to do so was by giving food to those in need. There is a small fund set up by previous missionaries called the Naomi fund, which was set up to help provide food for some of the beggars in town, and we are currently in charge of the fund. Every other Thursday, when our schedule allows, we go to First Baptist Church of Nalerigu and help hand out corn to the people who come. Rebekah enjoys 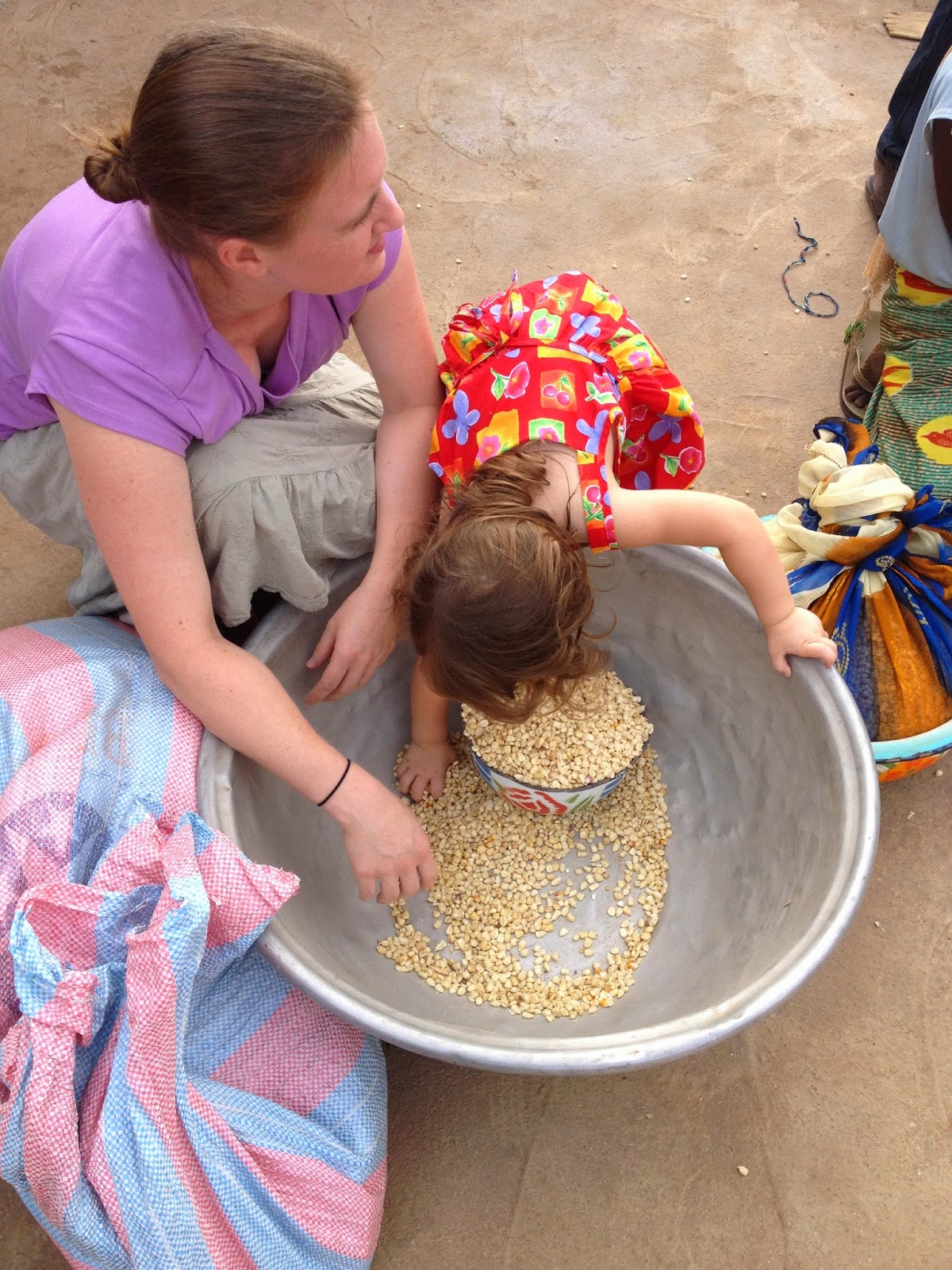 helping put the corn into the bowl. We decided to give a little something extra to the families in order to help them celebrate Christmas. Many Ghanaians enjoy having Jollif rice when they are celebrating, so we gave each family a bowl of rice and some oil. All the families gathered together as we shared the story of Christmas along with a short gospel presentation. We used a friend to help translate for us. After Tim and the pastor of First Baptist prayed for everyone, we began giving out the food. The people were so thankful to have something for Christmas, and we were thankful to be able to share Christ and to have our young children begin to see that Christmas isn't all about receiving gifts.
After we came home, we had our more traditional Christmas dinner. We had canned ham (that someone sent us), sweet potato casserole with pecans (another gift we received), green bean casserole, and fresh pineapple. What a treat! We talked with Rebekah again about why we celebrate Christmas and sang a few carols per Rebekah's request.
The next morning, we headed to Tamale (the 'big city' in northern Ghana). We had a pleasant three hour trip. We ran our errands and did our grocery shopping, and on our way out of town, we stopped by to greet some missionaries that we had recently met, the Federwitz's. They are a lovely couple with 4 children. The youngest was a little girl who loved playing with Rebekah and who Rebekah adored. We were leaving Tamale late, but they were so kind to offer us dinner. We were not able to stay too long, but this last stop made our trip to Tamale enjoyable for all. We ate a wonderful meal, had encouraging conversation, and the girls were able to get out of their seats and play. To top it all off, they sent us home with a plate of homemade Christmas cookies that we enjoyed on the ride home.
Even though we arrived home late, Tim had to return to work the next morning. We girls were sad not to have him home, but we enjoyed the time we did have with him. After dinner on Christmas Eve, we met up with the other missionaries at the hospital to sing Christmas carols to the patients and to hand out oranges to them. One of our fellow missionaries worked on an introduction in Mampruli to explain what we were doing and why we celebrate Christmas. It was a wonderful experience for us all and brought some joy for many sick patients. Rebekah still occasionally walks around the house singing, "Go tell it on the mountain...".

On Christmas day, we all woke up early so that we could have breakfast together. Over breakfast, we kept asking Rebekah questions to see if she remembered what the day was and to find out what she could remember of the Christmas story. The girls opened another gift (we wrapped almost everything, from the dolls that they received down to each shirt or pair of pants). Tim headed off to work, while we girls got to listen to Christmas music and watch a movie about the Christmas story called "The Promise". Tim was able to come home a little early from work. While he was home, a man and his niece came to our front door and were serenading us with djembe drums, and the man even allowed Tim to play the drum a little. We also made cookies that day so that Tim could take them to the nurses the next day (for Boxing day- a British holiday that the Ghanaians have continued to celebrate after independence from Britain). Boxing day, from what we understand, is like an employee appreciation day where you give your employees gifts. Here in Nalerigu, it is another reason to ask everyone for gifts. We only had a few people stop by asking for their box, so we had plenty to give to those who we actually knew. That afternoon, Joanna, a teenage girl that we have begun a friendship with due to her selling us vegetables at our door, stopped by with her siblings to wish us Merry Christmas and ask for a Christmas box. We gave her a loaf of banana bread and they gave each of our girls a small gift. We had so much fun with them as we asked them about how they celebrated Christmas and why they celebrate Christmas. They told us about the black powder that they use to stain their soles and palms black and the glitter they use to look beautiful for Christmas. They showed us their nice outfits and some games that they enjoy playing. We had so much fun that we lost track of time, which made us late for our dinner plans that night. That night, all of the missionaries on campus and some other expats gathered together for Christmas dinner. It wasn't our traditional American meal, but instead we had a wonderful Ghanaian meal of ground nut soup. We enjoyed singing more Christmas carols together and reading the Christmas story again. Over the next several days, we finished opening our gifts and stockings, Christmas cards, and lost mail packages that we had to hunt down. 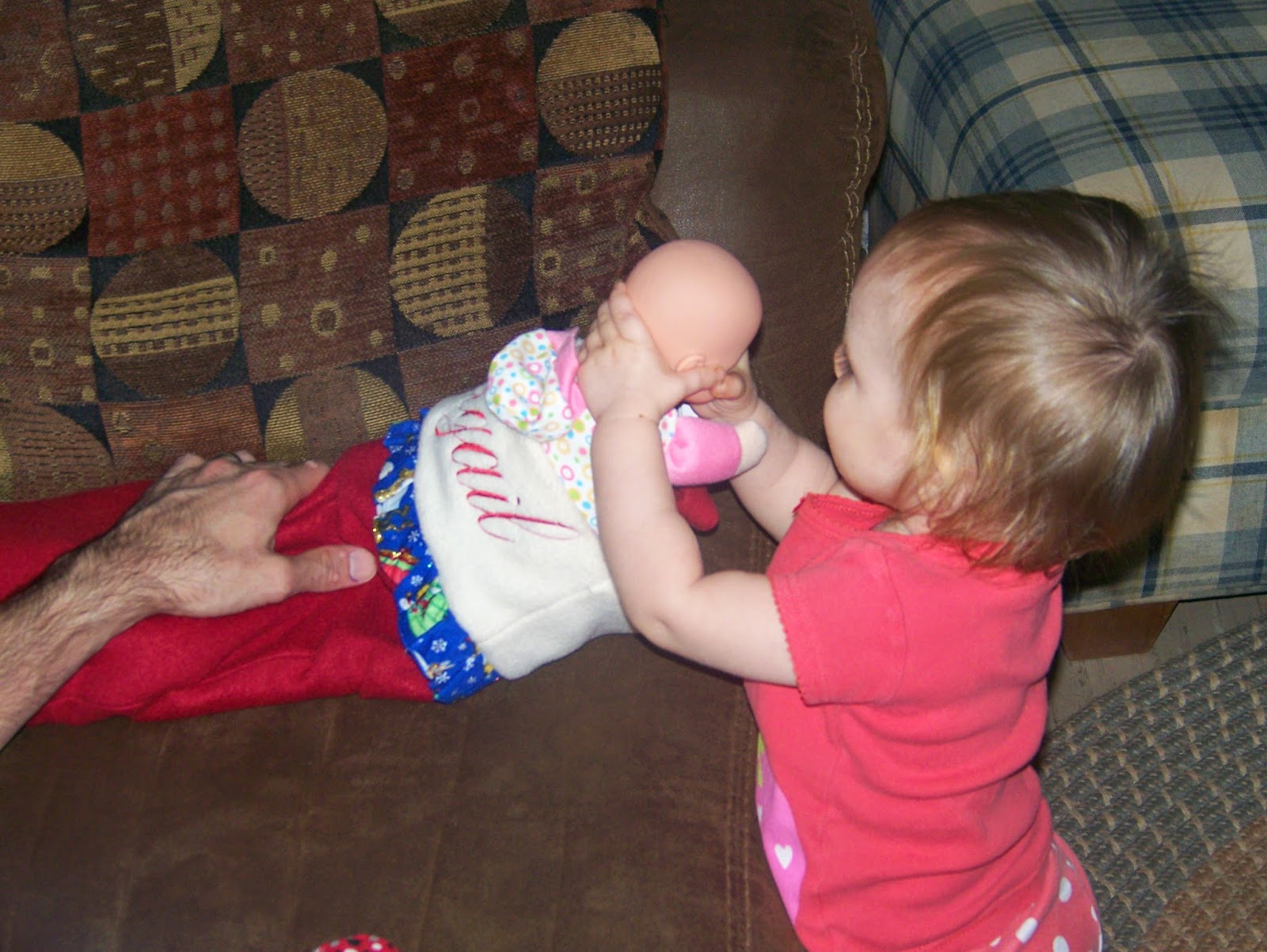 
We also had another unique opportunity- we were able to see Samaritan's Purse shoeboxes being handed out on the day after Christmas. Our neighbor mentioned to us the week before that there would be shoeboxes given out at the TB village. He thought that we would be interested, since we are here through  Samaritan's Purse. What he didn't know was that we have actually packed shoeboxes for several years. We were excited to have the opportunity to see these boxes given out, especially in the area where we are serving. Our neighbor also showed the Jesus film in Mampruli that night. We only were able to see the first scene, as Tim was called into the hospital.
﻿﻿﻿

﻿
The next evening, we had a huge surprise. We were sitting down to eat dinner and we looked out our back door to see a large fire sweeping across the dry grass in the fields behind our house. We watched as it grew closer and the sky grew darker. I was very frightened, especially when Tim was called into the hospital leaving me with the girls. He was kind enough to place a few calls, which brought the man in charge of maintenance over to our house to take a look. He reassured us that they had burned several feet of grass along our fence, which should keep the fire out of our yard.  As the fire spread to within a few feet of our fence and a few feet tall, I was quite concerned. Then the fire just quickly petered out. The fields that had been so brightly ablaze, almost instantly became as black as the dark night sky above it. As I sat pondering the situation, I thought about how this could be a picture of one's life. If you try to live life striving and working hard on your own, you may burn brightly for a while but you too will peter out. The constant hard work trying to achieve your goals will be like the bright fire that was burning, but it will end and fall short when you are burnt out and have nothing left to give. You may be giving light and doing good things, but if it's not with God's strength, you will burn out. However, if you are looking to God and relying on Him, the fire will continue to burn like the bush in Exodus. The Holy Spirit's fire will burn in you, but it will not turn dark, having left you consumed. You will have plenty of light to share with others without growing dim. So then I have to reflect on my own life. Am I trying to work for God on my own strength? Am I burning on my own and eventually will be burnt out? It sounds so easy to rely on God, but it isn't for me. It is a daily struggle for me, as I want to have control and say, "no worries, I've got this one God." Even the easiest of tasks becomes a struggle as I try to do it on my own. What about you with the work you are doing each day? Are you struggling through it, coming closer to burning out each day, or are you living your life with the Holy Spirit's fire within you?