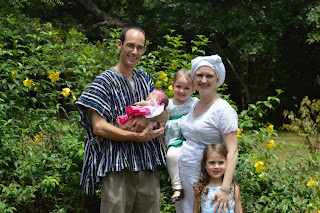 We are the Cahills- Tim, Lori, Rebekah, Abigail, and Hannah. We moved to Nalerigu, Ghana to work at Baptist Medical Centre (BMC) in May 2014. Rebekah is now five-years-old and Abigail is three-years-old. We served for two years with Samaritan's Purse Post-Residency Program after graduating from residency in Family Medicine at John Peter Smith Hospital in Fort Worth, TX. We then served another six months at BMC through Samaritan's Purse World Medical Mission and the George Faile Foundation. Now, as of January 2017, we have transferred over to the long-term sending agency, Christian Health Service Corps. We moved back to Ghana in March 2017 for long-term service. Lori delivered our third daughter, Hannah, at BMC in August 2017.


Tim's testimony
I grew up in a stable household with married parents who loved me. I went to church most weeks, was involved in the youth group, and went to some youth group conferences. I did not really spend much time reading my Bible at home or praying. I did not think it was important. I learned to be a good person, and I thought that was all that was required to go to heaven.

I left for college when I was 18 years old. Soon after getting there, I signed up at a booth outside my dorms that was run by Campus Crusade for Christ. Two guys from this campus ministry later came to my dorm room, and I began to get involved in a Bible study with other guys from my dorm. In my eyes at the time, it was a good time to hang out with other nice, good people, just like me.
I went to the winter retreat my freshman year at the beginning of 2002. While there, one of the activities was to go out in groups door-to-door in the community where we were. This made me very nervous, mainly because I felt that it was intrusive, and I never personally liked it when people would come to my door to talk about God. I went anyway. I just listened as other guys in the group asked these people questions about eternity and about Jesus Christ, and time after time, I would hear answers from the people whose house we were at that sounded like answers I would give. However, time after time, guys in my group would suggest another view that involved Jesus. Funny how God works! It was this experience, which had me feeling nervous at first, that God used to open my eyes about my sinful nature, separation from God because of my sin, and my need for a Savior. I realized that my good works were not enough to cover my sin and to qualify me for heaven, but Christ's sacrifice on the cross was enough! I began trusting in Jesus as my Lord and Savior.
After accepting Christ as Lord, I realized quickly that I still struggled with sin. I was not perfect, and His Spirit began convicting me of sins and idols in my life, things that got in the way of me glorifying God with my whole life. The reason for my desire to be a good person began shifting from "just to be a good person" to a way to glorify God. Over the years, He has chipped away at these sins and idols, and He has transformed my mind to one that is more focused on worshipping Him because He is worthy.
There are not adequate words to express my gratitude for the mercy and love God showed by sending His own Son to die on the cross for the sins of the world. Thank you, Jesus!


I was raised in a Christian home, where my parents encouraged us to know and follow Christ. My mother worked as a music and youth minister at church, so we were there several times a week. I heard many of the stories from the Bible, but I didn't understand what that meant for me personally. One day, my sister came home from school and began to talk to me about Jesus. She helped me understand why these stories were important to me. She explained to me that I (and every person) had done wrong things, called sin, and these sins kept me from having a relationship with God. God loves us all so much that He made a plan to pay for our sin so we could have a relationship with Him. This plan required that His only son, Jesus, would have to die as a sacrifice and be raised from the dead.  All I had to do was believe in Jesus and accept what He did for me. Then, I could have a relationship with God and live with Him after I died. I wanted to do this, so my sister and I went to tell my mom. My mom talked to me for a little while, to make sure that I really understood, and then I prayed to accept Christ. I was so excited that I wanted to go tell everyone. I remember telling my family, friends and neighbors over the next few days.
Since that day, God has allowed my relationship with Him to grow. There have been many ways that God helped me to know Him better, such as through prayer, reading the Bible, and spending time with others who trust Jesus. My life has not been prefect, but God has been faithful and loving through everything.
God has shown me that following Him does not mean that life will be easy, but He does promise He will be with me and that He has a perfect plan. God asked me during high school to pursue medical missions, so I majored in biology in college and went to medical school. It all seemed fairly easy until the second year of medical school when I began to fall behind because of falling asleep all the time. God allowed me to pass my classes even though I struggled through the remainder of the year. As I began hospital rotations during third year of medical school, I became sick for a few months, which made working very difficult. I slept through the majority of an important exam and ultimately had to take time off from school. This was so devastating to me, as my education had been such a focus for me. All of these events occurred at a time when my family and I were facing many other difficulties. In the end, I recovered from my illness and returned to medical school. I did graduate a year later than my class, but this allowed me to graduate with my future husband. God used this to redirect my focus to Him (not trust what I can do), to show me that He was there the whole time (trustworthy), and has a perfect plan (even when I don't understand it).
God was also gracious to me in giving me a wonderful family of my own. God brought my husband into my life when we were in medical school, but He had been working long before that. I never really dated much in high school or college because I was focused on my education. During my sophomore year of college, God began impressing on my heart to be praying for my future husband (especially for him to know Christ). Later, I found out that this was the year that Tim, my husband, accepted Christ. We began dating and were married during medical school. During residency, we were both present at the birth of our beautiful little girl, Rebekah Grace. This was a special gift, given that we had been involved in a bad accident only ten days before her birth. We also had the blessing of both being present at the birth of our second daughter, Abigail Ruth. Then, most recently, we both were present at the birth of our third daughter, Hannah Elizabeth, in Ghana. Our girls are such a wonderful addition to our family and such a joy to have with us.