As the browns and oranges of hot and dry season faded into rainy season in Ghana, the earth brought about changes with colorful flowers blooming, splashes of green appearing everywhere, and cooler breezes giving rise to thunderous storms. Just as the climate in Nalerigu brought many changes, much has happened since our last post at the end of March. We will try to just mention the highlights. 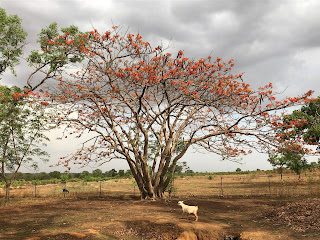 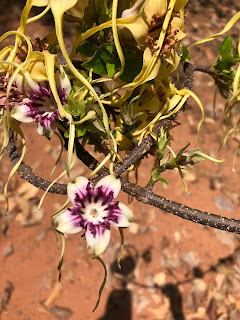 As we were preparing to celebrate God’s gift of new life for us on Easter, we were able to watch the birth of new chicks. At the beginning of April, 9 new chicks hatched! It was particularly special because the momma hen, “Brownie”, was the first chick that hatched inside our makeshift incubator last year, and we had all grown attached to her. Because she had a deformed leg, she had been shunned and picked on by other hens including her mother. However, she was redeemed by becoming the mother of these chicks- and she was a great mother! Not one of her chicks died or was snatched by predators under her care (reminding us of God’s care for us referenced in Matthew 23). Unfortunately, shortly before leaving Ghana, all of our adult chickens died suddenly. Surprisingly, none of our young chickens got sick. After observing them for more than a week, we distributed them to some friends before we left. 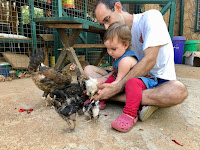 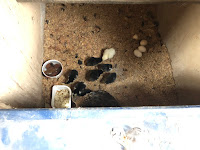 On the same day as the chickens hatching, we found out that Lori was pregnant again! That is when gears began shifting to bring about changes that we had not anticipated. Our sending agency now requires that we deliver stateside, necessitating that we return to the US for a time. She is now about 26 weeks pregnant and overall doing well. She will be establishing obstetric care soon, with plans to deliver in Memphis.

On the home front, Lori finished up the first official year of homeschooling for Rebekah in June. We were able to participate in the Tamale homeschooling group to celebrate a Sader meal around Easter and learn a little of the U.S.’s God-honoring history on the 4th of July. After a short break, we are now going strong with the second year. Although not officially required to do so yet, Abigail is also continuing to participate. There were a few books from the schoolhouse (where previous missionaries left school materials) that were part of this year’s curriculum, so Lori and the girls worked hard to get through those before we left Ghana. Also, we received a bunk bed for the girls in April, and they thoroughly enjoyed it for the remainder of our time in Ghana. They had hoped that Hannah would want to join them in “the big girls’ room”, but she preferred the peace and solitude of her crib in a separate room. Just after getting the new bed, we had local friends replace windows in both the girls’ rooms, as termites had destroyed the frames of the windows. While doing home repairs, we decided to also replace several of our “holey” mosquito window screens. As a side note, Abigail lost her first two teeth (in the same evening!) and Tim took part in killing 2 snakes in our garage one night at the end of July. 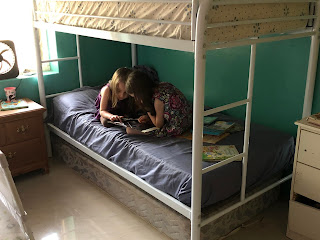 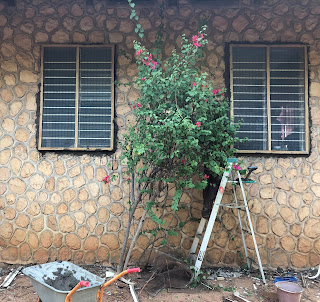 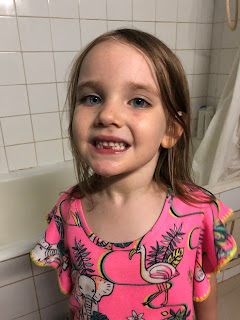 Tim started rounding in Pediatric Ward in April (first time as primary rounder there since 2014). He saw several interesting cases during his time there. Among others, the cases included: intussusception (one part of intestines telescoping into another part, sometimes leading to loss of blood supply and dead bowel), malnutrition with heavy worm burden (child was passing many worms in stool after anti-worm treatment given), Tetralogy of Fallot (a serious heart condition that some children are born with), acute osteomyelitis (bone infection), and lots of neonatal sepsis (babies sick with fever). Tim also rounded on Isolation Ward (he’s been the main rounder there for a long time), where most patients have wounds or tuberculosis (as well as meningitis or tetanus occasionally). He has been very busy with wound care since March, logging over 60 major debridements (many of them being necrotizing fasciitis) as well as doing a few skin grafts. He has also had the opportunity to share Christ with some of the patients, and one man accepted the invitation to receive Christ. Praise the Lord for each soul God brings into His kingdom!


As a family, we were able to have 2 new cultural experiences before we left. When you hear the word “pounding” in Nalerigu, there are two thoughts that come to mind: making fufu (a starchy food usually made of yams in Northern Ghana) or flooring a building or courtyard.
We finally pounded our first batch of fufu in April. Tim had been gifted with a guinea fowl and some yams by one of his grateful patients. Our house help, Abena, directed us on how to prepare and pound the yams properly. This pounding involves using a specialized large heavy wooden stick (about the height of Tim and requiring both hands to lift) to repeatedly smash the boiled yams in a large wooden mortar until they become a rubbery consistency. Each time the pounding stick is raised, another person slips their wet hand into the mortar to turn the congealing mass of yams so that there is a similar consistency throughout.  This carries the risk of broken fingers if one’s timing is ever off. Tim did most of the pounding (with the girls trying a few times), and Lori did most of the turning. What a workout (for Tim) and trust exercise (for Lori)! We then enjoyed the fufu with some groundnut stew and guinea fowl. We were pretty proud of our first attempt, but we also appreciate that there is a boxed version that only requires adding boiling water. 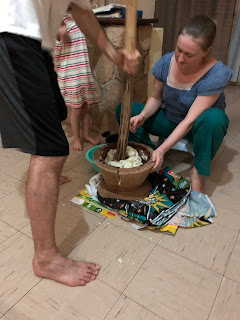 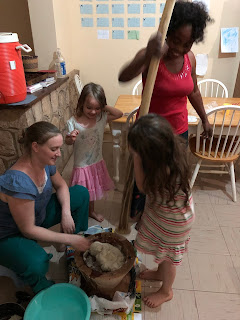 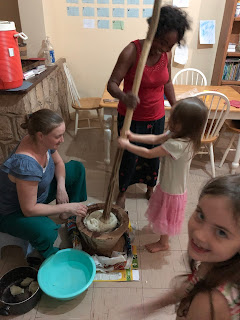 In July, Tim was able to attend his first pounding in town. The church we attended in Nalerigu had outgrown the small building beside the pastor’s home, so they built a new, larger church building on the edge of town.  We participated in backfilling the floor of the church with dirt after the foundation for the walls was complete about a year ago. We were able to see the progression as the walls and then the roofing were added. Recently, we had the pleasure of witnessing and being a part of the pounding of its floor. In this type of pounding, many women come and use pounding sticks together to flatten the dirt floor surface of a building or courtyard prior to application of cement. If one is to floor an area, one will begin with leveling the ground by hauling large bowls of dirt to spread on the floor while others use hands and one type of small ‘pounding stick’ (more like a paddle) to shift and compact the dirt. Once the floor seems level, buckets of water are thrown on the dirt floor to prepare for the group to pummel the ground in unison with a slightly different shaped ‘pounding stick’. They use chant-like songs to keep everyone on the same beat, making it almost seem choreographed. Once the floor is adequately compressed and leveled, a thin layer of cement is spread on the floor. There is usually water, cola nuts, and a meal provided for workers and gum given as a parting gift for all those who attend. We had the honor and privilege of attending church in this new building for a few Sundays before we left Ghana. There was such joy and thanksgiving with singing and dancing as we celebrated during the first service in the new church. On our last Sunday, it was sad to say farewell to the congregation. Pastor Alex prayed for us and gave us a special send off which we will remember fondly. 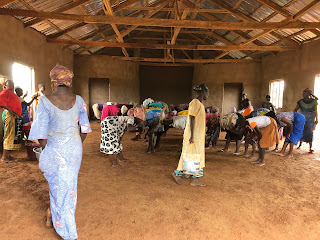 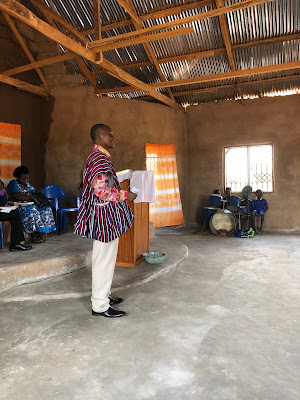 Lastly, we had the opportunity to spend some time with our friends during the few days before we left, and we thoroughly enjoyed it. We were able to have meals with some friends and families we know in Nalerigu. We also attended a movie night with the volunteers on campus. Additionally, the Tamale homeschool group had a farewell dinner for us, so we could have one last sweet fellowship with them and say goodbye to everyone. Many special memories were formed, and we are grateful that God gave us that time.

Prayer requests:
- Please be praying for God to give us wisdom and direction on what is next on our journey of life
- Lori’s pregnancy
- BMC staff and patients
- That people in Ghana whom we had interactions with would follow hard after Christ
- God would encourage us during our time of debriefing in October