Reflecting on God as the Great Physician, Part 2 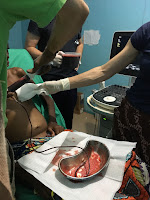 To continue from my last blog reflecting on God’s goodness and His role as the Great Physician, I will start by talking about a young woman whom I will call AZ. She came in to BMC back in November last year with a history of fevers, cough, and weight loss for the past few months, as well as lumps on her neck. She was very thin and had diffuse neck lymphadenopathy (enlarged lymph nodes) with some of them with open wounds that were draining some pus (a classic appearance of lymphadenitis due to tuberculosis- also known as scrofula). Her sputum was checked for AFB (acid-fast bacilli- to test for tuberculosis), and it came back positive, so we initiated TB treatment. A few days later, I was on-call for the hospital and was called in the middle of the night to come see AZ because she was having extreme difficulty in breathing. She could not lie down and was sitting on a chair next to her bed with her forehead resting on the bed, breathing very fast, lungs were not clear, and her legs were now very swollen. I gave her some diuretics (medicines that cause someone to urinate more in order to get fluid off of the lungs and help with leg swelling), and then I did an ultrasound on her heart later that morning. The ultrasound showed a very large, thick pericardial effusion (fluid around the heart), and her heart was just waving back and forth in the fluid (for medical people- this motion would have caused something called electrical alternans on EKG if we had had that available, and it is a sign of cardiac tamponade- too much pressure on the heart from the fluid surrounding it, and it causes the heart to not pump the blood adequately; it requires emergent drainage of the fluid- a pericardiocentesis). So later that morning, Dr. Haun (another missionary here) and I drained some of the fluid from around her heart- approximately 1 liter of lightly bloody fluid was removed! By the next morning, AZ was walking around the hospital, breathing much better; and by three to four days later, her leg swelling was gone and she was able to lie down to sleep at night. Praise the Lord for such a miraculous recovery! I later had the opportunity to sit down with AZ to pray with her and tell her a story about the ultimate Heart Specialist- Jesus. Please pray that AZ would come to know the peace and comfort that comes with having a relationship with Jesus Christ. 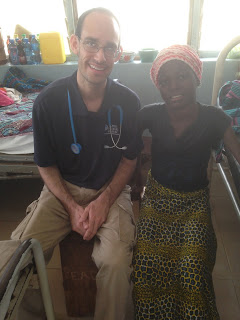 Another woman, whom I will call Bima, came into BMC a few years ago with difficult to control diabetes. She was treated for a while with oral medications to try to control her blood sugar, but eventually she had to be switched to insulin. In our setting here in Northern Ghana, being on insulin is not an easy task for the average person because most people do not have refrigerators to make the insulin last, do not have access to a glucometer for checking their blood sugars, and have no good way of administering the insulin because of not living close to a health facility and feeling nervous about doing it themselves. Bima actually moved from her village to Nalerigu so that she could come to BMC every morning and every evening to have her blood sugar checked and insulin given. Most patients are unable to make this sacrifice. She was very thin, and during one of her admissions for hyperglycemia (high blood sugar), she began spiking some fevers and reported having a cough for the past couple weeks. We tested her for TB and it came back positive. We treated her for pulmonary tuberculosis- aka TB of the lungs- and by the end of her 6 months of treatment, she had gained a significant amount of weight- now up to a normal weight- and had her diabetes under much better control. I still see her fairly often in the hospital coming in to get her morning insulin injection. The drastic change in her appearance from before and after TB treatment reminds me of what Paul says about the change in a person who accepts Christ as their Lord and Savior in 2 Corinthians 5:17 “Therefore, if anyone is in Christ, he is a new creation; the old has gone, the new has come!” 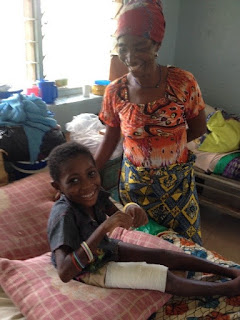 I am realizing that many of my memorable patients had tuberculosis. This next story also fits that same theme. A few years ago, there was an ill-appearing 7 year-old girl, whom I will call Mary, who came in with a few day history of a swollen right thigh and fever. She was admitted and treated with antibiotics, but her condition was not improving. Her knee was becoming stiff, so we took some fluid out of her knee joint (which ended up being pus) and placed a drain in her knee. A few days later, she also had an abscess in her thigh which we drained. Not long after that, she began having difficulty breathing, so a chest X-ray was done.  It showed that her heart was enlarged and she had a pneumothorax (air inside the chest but outside the lung). I did an ultrasound on her heart to see the cause of the heart enlargement, and it showed a pericardial effusion (fluid around the heart that isn’t supposed to be there) as well as heart failure (the heart was not pumping well). I also placed a chest tube for the pneumothorax. Over the next several days, Mary was placed on several antibiotics to cover almost any bacteria possible, but she continued to spike high fevers and not improve much. She did not have much cough and did not have sputum, so we were unable to test for pulmonary TB. After much thought and prayer, I finally decided to start her on anti-tuberculosis treatment to treat suspected TB pericarditis (infection of the sac around the heart) and TB osteomyelitis (infection of the bone). Oftentimes in children, particularly in our setting where specialized TB tests are not available, a diagnosis of TB (more commonly extrapulmonary-TB outside the lung-in children) is confirmed after the patient responds favorably to empiric TB treatment. After a few weeks of anti-tuberculosis treatment, Mary began to improve dramatically and her fevers disappeared. She had always looked so tired, sick, and unhappy during the first several weeks in the hospital. Now she was a happy, playful little girl with a big smile (along with her mother).

Lastly, I would like to share a story about God’s protection and healing for a group of gunshot victims- this one is not related to tuberculosis. Back in December of last year, I was on-call and doing my night rounds in the hospital when one of the nurses asked me if I had heard about what happened at an area about 2 hours from BMC. I had not heard anything, so we sat down and he showed me some texts and WhatsApp messages that he had received from a friend in that area describing an attack, where several masked men on motos carrying semi-automatic guns opened fire on innocent people in the market. There were 11 casualties, 4 of which had died right away, and the other 7 were supposedly en route to BMC. I called Dr. Haun, the general surgeon, to give her a heads-up, and about 30 minutes to 1 hour later, I received the first phone call from theatre: there were 4 patients with gunshot wounds to the abdomen. Dr. Haun, myself, and a couple of the volunteers went right away to the hospital and started triaging the patients. There were 3 adults and one child; 3 of the 4 victims were eviscerated (intestines were hanging outside the body); two of the patients were in shock and very anemic (low blood count); there was only one anesthetist and one general surgeon. Dr. Haun operated on the patients all throughout the night while I stayed up managing the IV fluids, blood transfusions, and urine output of the other patients that were waiting for surgery, while periodically giving updates to Dr. Haun in the operating room. A few hours after the first 4 patients had arrived, another 3 arrived: one with a femur (or thigh bone) fracture, one with a tibia/fibula (the two bones in the lower leg) fracture, and one with a gunshot wound in the buttock with the bullet lodged in the scrotum. I splinted the first two and put them on traction, then transferred them the next day to see an orthopedic surgeon. The third one recovered without any procedures needed. By God’s grace, all 7 of the gunshot victims that arrived at BMC survived.